A first-time DUI arrest can be a frightening shock. No doubt, you never expected to be in this situation. Whether you were, in fact, under the influence or not, you are doing the right thing by exploring this website and thinking about hiring a Tempe first-offense DUI attorney.

When you were arrested on suspicion of drunk driving in Maricopa County, did the police administer field sobriety tests such as a pen test or a “walk and turn” test? Those tests may have been flawed – and the evidence that the police allegedly gathered from them may be thrown out.

Did the Tempe police administer chemical tests, such as a Breathalyzer test or a blood alcohol test? If law enforcement agents did not follow legal procedures in giving you those tests, or if the technical tools used to administer the tests can be shown to be unreliable, your test results may not be held against you.

Call Rosenstein Law Group at (480) 248-7666 for a free consultation to discuss the specifics of your case.

What Is a DUI?

Under Arizona Revised Statute Section 28-1381, the crime of driving under the influence (DUI) is to drive or be in actual physical control of a vehicle while under the influence of intoxicating liquor, any drug, vapor or combination thereof. The law states that impairment to even the slightest degree while being in physical control of a vehicle is against the law.

In addition, it is against the law to be in physical control of a vehicle while under the influence of any intoxicating drug. This includes prescription medications that impair a driver’s abilities, such as with side effects like drowsiness, confusion or dizziness. It is not a defense to a DUI charge if the operator was legally entitled to use the drug (such as medical marijuana).

What Are the Penalties for a First-Offense DUI in Arizona?

A DUI conviction in Arizona can have serious consequences, even if it is your first offense. Driving under the influence is a class 1 misdemeanor in Arizona that can result in a sentence that includes:

In addition to criminal penalties, the Arizona Motor Vehicle Department may suspend your driver’s license for one year or longer.

Arizona has three levels of DUI: ordinary, extreme and super extreme. Although the penalties for a first offense are less than second and subsequent DUIs, if you are charged with an extreme or super extreme DUI, you will face more severe penalties than with an ordinary DUI.

Note that a first-time DUI can be prosecuted as a felony crime if you were driving on a suspended license at the time of your arrest or transporting a child under the age of 15. If you caused a car accident with bodily injuries while driving under the influence, you may also be charged with aggravated assault or manslaughter. 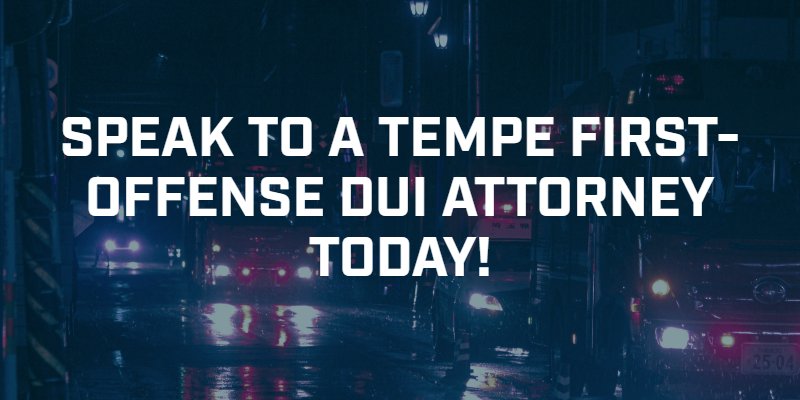 Do You Need to Hire a DUI Defense Attorney?

Even if this is your first DUI offense, it is critical to take your charges seriously and do everything in your power to minimize the effects of your arrest. A DUI on your record can result not only in jail time and hefty fines, but long-term ramifications. It can make you less hirable to prospective employers, for example. It will also increase the price of your car insurance for a few years – often, by a few thousand dollars per year.

A DUI defense attorney will have the knowledge and skill to protect you from criminal consequences as much as possible. For example, your lawyer can help you attend alcohol screening and complete other court-ordered requirements to reduce your mandatory jail time to just 24 hours in custody rather than 10 days. A lawyer can also help you attend administrative hearings to get your driving privileges back.

These are two key examples of aggressive defense strategies likely to be employed by your Tempe DUI lawyer at Rosenstein Law Group. We know, and emphasize to such clients, that the opportunity to preserve a crime-free record is worth every possible effort.

If we represent you after a first-time DUI arrest in Maricopa County, we are prepared to go to work right away to protect your driving privileges, your freedom and your long-term prospects for a criminal record-free future:

Learn more about how our Tempe first-offense DUI attorneys can help by scheduling a free consultation.

For a free case evaluation with a local first-offense DUI attorney in Tempe, Scottsdale, or elsewhere in Arizona, call Rosenstein Law Group at (480) 248-7666 or contact us online.