Getting a DUI charge is a terrifying way to end an evening. No one wants to find themselves treated like a criminal, but driving under the influence of alcohol or other substances is a crime in Arizona and throughout the United States. When you apply for an Arizona driver’s license, the state considers that process as giving them “implied consent” to submit to blood-alcohol level testing. A DUI conviction carries automatic license revocation as well as jail time and fines on a sliding scale, depending on your number of prior convictions.

Many DUIs are the result of one evening’s poor choices, not a lifestyle or an ongoing pattern of behavior. If you’ve been convicted of a DUI, you might be wondering if there’s a way to take back the bad choice you made. Is there ever a possibility of DUI expungements in Arizona? The attorneys at the Rosenstein DUI Defense Law Group in Scottsdale are ready to answer your questions.

Who Can Find Out About My DUI Conviction?
How Long Does a DUI in Arizona Stay on Your Record?
Is it Currently Possible to Get a DUI Conviction Expunged?
Sealed vs. Expunged Records
What is A.R.S. § 13-911?
How Our Attorneys Can Help With a DUI Expungement
Speak to a Lawyer Today 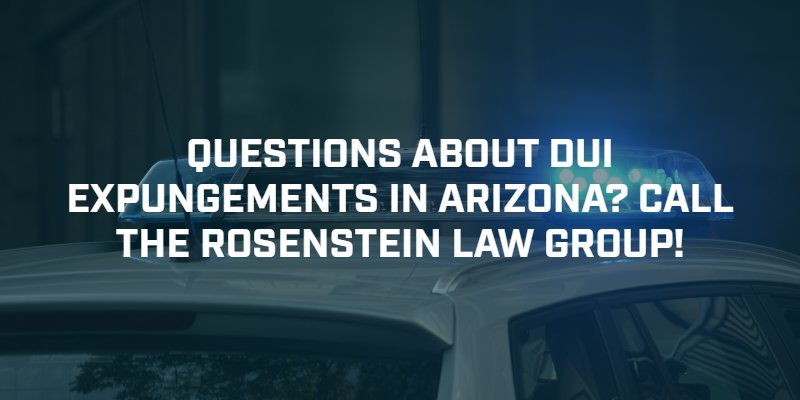 Who Can Find Out About My DUI Conviction?

The moment you’re convicted of a DUI, you lose your right to keep the information private. In Arizona, the charge alone means that specific entities are informed of your arrest. This potentially impacts your life in many areas, including future federal employment. Arizona shares your DUI information with the following:

Many people facing DUI convictions ask about DUI expungements in Arizona in the hopes of removing a regretful incident from their record, but Arizona takes driving under the influence very seriously. If in the end you aren’t convicted, the record shows this result; however, it does not erase records of the initial arrest which may negatively impact your ability to work in government agencies or travel to other countries.

How Long Does a DUI in Arizona Stay on Your Record?

The state of Arizona considers a DUI to be just as serious as any other criminal conviction, meaning it remains a permanent part of your record. The good news is that you’ll enjoy the privilege of some improvement in your legal standing after 7 years post-DUI conviction. If you receive a second conviction for DUI before 7 years, you’ll face much stiffer fines and increased jail time compared to the first conviction. If you aren’t convicted of a second offense and your record remains clear for 7 years after your first offense, the state treats any subsequent conviction the same as a first offense DUI in Scottsdale.

In Arizona, this 7-year period is known as a “look-back” period and it determines how the state treats further offenses.

Can You Currently Get a DUI Conviction Expunged in Arizona?

Currently, the state of Arizona considers a DUI conviction permanent. There is no legal avenue for DUI expungements in Arizona. The legal term “expungement” means to erase or destroy a criminal record completely, removing it from both state and federal records. While a complete expungement isn’t possible in Arizona, the state has a legal avenue for “setting aside” a DUI conviction. A skilled Scottsdale DUI defense lawyer like the attorneys at the Rosenstein Law Group in Scottsdale can walk you through the process of a DUI set-aside, including carefully fulfilling all DUI sentencing obligations. These may include:

Be sure to keep meticulous documentation showing you’ve met every requirement and that you have a clean record since your DUI conviction. An experienced attorney can help you prepare and file a motion with the Arizona Superior Court for a set aside of your DUI.

When granted a set-aside, your conviction no longer appears on the basic background checks performed by most organizations and companies. This improves your record and helps you to regain many of the abilities and privileges you enjoyed before the conviction.

What’s the Difference Between Sealed and Expunged Records?

Some of our clients with DUI convictions hope to start fresh and have questions about the difference between sealed and expunged records. Expunging a record means the state destroys the record completely so it no longer exists in any criminal agency and doesn’t appear in any background checks or on public records.

A sealed record means the state seals away the record of the conviction from the public and makes it available only to certain criminal justice agencies and some licensing agencies relating to sensitive types of employment.

Expunging these records effectively erases them from ever appearing on background checks.

New laws taking effect in January of 2023 also allow for the sealing of some misdemeanors and non-violent crimes. This could potentially seal your DUI records in the following circumstances:

While prior felony convictions add additional years to the waiting period, the new provisions bring hope to many people with the stain of an unfortunate DUI in their history.

Our attorneys at the Rosenstein Law Group in Scottsdale enjoy a strong reputation for aggressive DUI defense in Arizona. With over 100 years of combined experience, we offer powerful strategic defense for our clients. We work with you to ensure you understand how the process works every step of the way as we explore all the legal options and resources to find the best possible plan for your unique case.

At Rosenstein Law Group, we’re passionate about preventing a single bad choice from negatively impacting the rest of your life. Everyone deserves a second chance. Call our firm or contact us online today to ask about DUI expungements, conviction set-asides, and the new provisions for sealing the records on certain non-violent convictions. Let our team fight aggressively for your future.