If you are facing a DUI charge in the Phoenix area, your very future could be at stake. Be sure that you have an experienced Phoenix DUI defense attorney with the ability to protect your rights. Based in Phoenix and serving clients statewide, the Rosenstein Law Group provides complete DUI defense services to clients throughout Phoenix and surrounding areas. We know the law, and we know your rights. You can rely on us for the focused, results-oriented representation you need during this critical time.

How Can Our Phoenix DUI Attorneys Help?

According to the American Bar Association (ABA), the National College for DUI Defense is the only organization in the United States that can bestow Board Certification in DUI defense. Our founding attorney, Craig Rosenstein, is one of only a handful of Board Certified DUI defense attorneys in the state. You can feel confident that your case is in the hands of one of the most qualified firms available.

After an arrest, you probably want to know if you should plead guilty or fight your charges. Never plead guilty without first consulting a knowledgeable Phoenix DUI lawyer. There can be numerous defense strategies that can avoid a conviction, even if you were legally intoxicated. Before you say anything to the police, talk to a Phoenix criminal lawyer experienced in DUI cases first.

We represent clients in all types of DUI cases, including:

If you’ve been accused of any of the offenses listed above, then you could be facing serious felony DUI charges for which you will undoubtedly need the skillful defense of an experienced Phoenix DUI defense attorney.

In the state of Arizona, any DUI, extreme DUI or super extreme DUI will be charged as a misdemeanor offense, each of which will be punished under a separate set of penalties. For example, a first-offense DUI could result in up to 10 days of jail time, hundreds of dollars in fines and surcharges, driver’s license suspension, mandatory alcohol screening and education, community service hours, and even up to five years on probation. On the other hand, an extreme DUI, while still a class 1 misdemeanor offense, will be penalized quite differently.

A first offense for extreme DUI, which is categorized by a blood alcohol content between .15 and .199, could result in up to 30 days of jail time, thousands of dollars in fines and surcharges, driver’s license suspension for up to 90 days, alcohol screening and education, community service hours, and up to five years on probation. As the seriousness of the offense rises, i.e. second offense extreme DUI or super extreme DUI (BAC over .20), so too will the severity of the consequences that are applied to any conviction that is made.

Arizona lawmakers intentionally make the penalties of driving under the influence severe. Due to the nature of this crime (the risks to public safety), the State of Arizona penalizes DUI convictions heavily. DUI penalties depend on the circumstances of the alleged crime, such as the driver’s BAC level at the time of the arrest and whether anyone was injured in an accident caused by the driver.

Here is a breakdown of Arizona’s DUI penalties, which include both consequences imposed by a judge and administrative penalties from the Motor Vehicle Department:

Judges often like to make a criminal defendant an example for others in the community to discourage similar crimes from being committed in the future. This can result in a judge choosing to impose the highest sentence available against a DUI defendant and refusing to reduce the charges or penalties. This makes it even more important to hire a skilled criminal defense lawyer in Arizona; a lawyer will do everything possible to protect you from the most severe consequences of a DUI conviction.

One of the most simple and frequent questions about Phoenix DUI charges is whether a conviction necessarily means jail time. Unfortunately, Arizona law mandates jail time served for all DUI-related convictions. However, this should not send all persons facing DUI charges into immediate despair. There are several alternatives to jail sentences that can be bargained for in Arizona. Furthermore, while jail time sounds extremely daunting, minor offenses can have a sentence as low as one day spent in a county jail.

The key in determining the sentence for a DUI conviction comes down to the nature of the crime. While driving under the influence seems like a straightforward charge, there are many types of DUI offenses that can either mean a heavier or lesser sentence in the event of a conviction.

In a 2012 bill passed by Arizona legislature, the regulations for ordering jail time in a DUI conviction were revised, in many ways to the advantage of Arizona residents. While DUI laws in Arizona remain some of the toughest in the country, incarceration requirements are much more lenient now than they were prior to January 1, 2012. Jail time is still mandatory for convictions but can be reduced or pardoned through several alternatives.

What Is the Minimum Jail Time for a First-Offense DUI?

The minimum jail time for a regular first-offense DUI in Arizona is one day in jail. Prior to the 2012 revisions, the law stipulated that the convicted had to spend a full 24 hours in jail to complete the sentence. A seemingly insignificant change in the wording has now made an earlier release a possibility. The law now states that the convicted must spend one day, rather than 24 hours, in jail. This new wording makes the interpretation of “one day” more subjective, allowing for an earlier release.

Driving under the influence cases are received at multiple courthouses in Phoenix, Arizona. The court in charge of your case will be made clear to you during the criminal justice process, such as when you are given your orders to return to court for your arraignment hearing. The courthouse that will hear your DUI case depends in part on the nature of the charge. There are three options:

To find out which courthouse will most likely hear your case, consult with our attorneys. We have years of experience handling cases in all three of these court systems. We have relationships with many court clerks, judges and prosecutors within the Phoenix criminal justice system that we can use to our clients’ advantage. As your representatives, we can attend hearings in any courthouse in Phoenix on your behalf.

Is an Ignition Interlock Device Required After a DUI in Arizona?

Arizona law requires the installation of ignition interlock devices in the vehicles driven by those convicted of DUI in the state. The new revisions to the law allow for lesser jail sentences if the individual agrees to have an ignition interlock device installed in their vehicle. The installation would be mandatory for any conviction but if the convicted agrees to an extended installation, they can have their jail sentence suspended sooner rather than later. Prior to this change, an Arizona extreme DUI conviction, required at least 30 days served in jail before suspension could be granted for further jail time.

Under the new revisions, an individual only has to spend 9 days in jail before they can be granted a suspension for the remainder of the sentence. The suspension is granted upon the agreement by the convicted to have the ignition interlock device installed in the vehicles they will be driving once their license is reinstated. For a super extreme DUI in Arizona, a defendant can be released after just 14 days in jail, as opposed to the 45 days required before the revisions, if they install the device.

This is one of the more beneficial changes to the law, not just for DUI defendants but for the Arizona community as a whole. Ignition interlock devices have the same effect of keeping the road’s safe from drunk drivers as a jail sentence. Since the driver of the vehicle will not be able to drive unless the device shows a .00 BAC level, this alternative allows for safer roads without excessive jail sentences.

What is an Alternative Sentencing Program?

Lastly, jail sentences can be fulfilled through alternative sentencing programs depending on the crime in the case. Options for alternatives include work release, which allows an individual to go to work during the day and return to the jail at night, home detention with an ankle bracelet and monitored perimeter and extended alcohol treatment programs. Negotiation for these alternatives is very possible by the right Phoenix DUI attorney and if granted, can keep an individual from having to step foot in a county jail.

The new revision to Arizona’s DUI laws makes the possibility of home detention much more real for many Arizona residents convicted of driving under the influence. Home detention is a way to serve a jail sentence within the comforts of one’s home. This concept has been even more liberalized. The recent changes allow for home detention much sooner than before, reducing the time spent in an actual jail. Furthermore, the statute about ignition interlock devices can be combined with this revision, reducing the required time spent in a jail even more. The conditions of this change are very complicated but can mean a fraction of the time previously required for a DUI conviction. An individual previously required to spend a minimum of 30 days in jail can be eligible for just two and a half days in jail if they agree to an ignition interlock device and are granted the ability for home detention.

Will I Go to Jail for DUI in Phoenix?

While the initial answer to the question of imminent jail time is “yes,” it is given with reservations because of the many options available. Lesser sentences or jail alternatives are more available than they ever have been in Arizona. Furthermore, jail sentences are only given in the event of an actual conviction, which is not always necessary. The obvious way to avoid jail time is to not drive after consuming alcohol. Secondly, with the help of an experienced DUI lawyer in Phoenix, the facts and evidence against you, if you are arrested for DUI, can be challenged and dismissal may be a very real possibility depending on the circumstances of the case.

Are There Any Defenses to a DUI Charge in Arizona?

There are several common defense strategies used in DUI cases in Arizona. As your lawyers, Rosenstein Law Group will custom-tailor the ideal defense strategy for your specific case based on the facts and circumstances. This is how we achieve the best possible case results for each of our clients. Potential defenses against driving under the influence charges include:

While your lawyer will build the strongest possible defense strategy on your behalf, you can help your case by knowing what to say and what not to say after your arrest. Do not answer any questions asked by a police officer until you have a lawyer present, for example. Protecting yourself from the beginning of your DUI criminal case can expand your defense possibilities.

What Should You Consider Before Selecting a DUI Defense Attorney?

Take your time when choosing your Phoenix DUI defense attorney. Do your research and select the one that is right for you and your case based on the situation. Factors to consider before hiring a lawyer include:

At the Rosenstein Law Group, clients have trusted us with their most complicated and challenging DUI cases in Arizona for many years. Find out if we are the right fit for your DUI defense during a free, no-obligation case consultation in Phoenix. 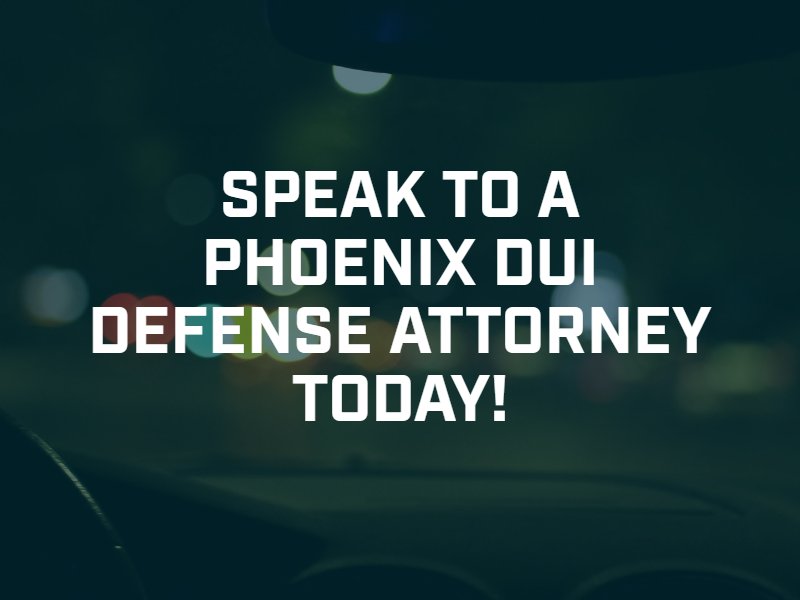 Schedule a Free Consultation with a Phoenix DUI Lawyer

Call our office today to set up a confidential consultation with our board-certified lawyer. When you work with the Rosenstein Law Group, you can have peace of mind knowing that an elite team of top-notch Phoenix DUI defense attorneys are on your side. Learn more about your defense options and about working with our proven legal team by calling (480) 452-1028 for a free, no-obligation consultation or contact us online.