According to Arizona’s DUI law, even if you were merely “impaired to the slightest degree,” you may be held to be guilty of driving under the influence of a controlled substance. Drugs other than alcohol may be cited as the offending controlled substance in your DUI charges. Prescription drugs in your blood may make you as culpable as illegal narcotics.

Rosenstein Law Group is in the practice of law to defend Arizona drivers who have been charged with drunk driving or drug-related DUI. If you are charged with driving under the influence of drugs, do not assume you will be found guilty. Our legal team is here to help clear your name, preserve your freedom, and minimize any potential penalty. From extreme DUI defense in Tempe to serious drug charges, we can help.

Call (480) 248-7666 to schedule a free initial consultation and preliminary case analysis. We handle DUI defense for clients throughout Arizona, including Tempe, Scottsdale, Mesa, and Phoenix.

Why Choose the Rosenstein Law Group?
What is Drugged Driving in Arizona?
How Is Drug Impairment Measured or Proven?
Why Using Even RX Drugs can Lead to a DUI
Penalties for Driving Under the Influence of Drugs
Potential Defenses to a Drug DUI Charge in Arizona
How Can a Tempe Drug DUI Attorney Help
Speak to a Lawyer Today

Why Choose Us for Tempe Drug DUI Defense? 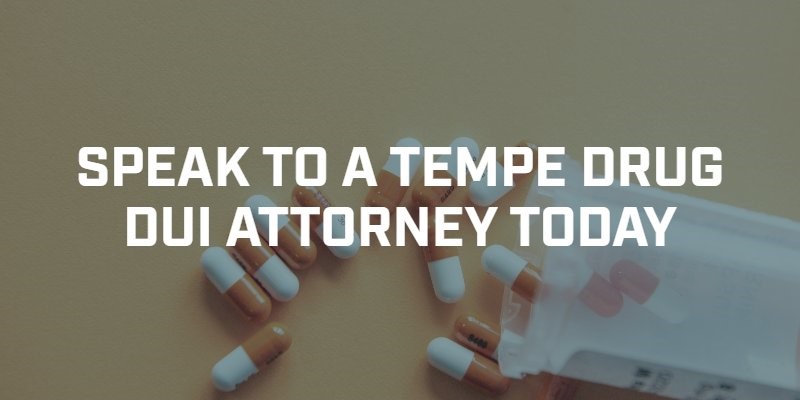 What Is Drugged Driving in Arizona?

How Is Drug Impairment Measured or Proven?

Unlike alcohol, Arizona does not have a specific blood alcohol content (BAC) level that can be used to prove a driver’s impairment or intoxication from drugs. Instead, a law enforcement officer’s initial assessment of a driver is based largely on the driver’s behaviors or broken laws leading up to the traffic stop, physical appearance during the stop, and a driver’s confession of taking illicit drugs or medications before driving.

Once the officer suspects a drug DUI, he or she will typically measure drug impairment through a blood or urine test. However, drugs are not processed out of the body in the same way as alcohol. Different drugs can take different amounts of time to be flushed out of an individual’s system. Marijuana, for example, can stay in a driver’s bloodstream for days or even weeks. This means that drug tests taken at a traffic stop do not always have accurate results.

Arizona has a per se drugged driving law – also referred to as a Zero Tolerance law – that states that a driver can be charged with a drug DUI if any detectable amount of a particular drug is found in the driver’s system at the time of the traffic stop, regardless of whether or not the driver is actually impaired. The drugs listed in the per se law (Arizona Revised Statute 13-3401) include cannabis, cannabis metabolites, cocaine, MDA, MMDA and PHP.

Why Using Even RX Drugs can Lead to a DUI

Certain prescription drugs can cause drivers to feel fatigued and driving while drowsy is quite dangerous. This is precisely why you should take a close look at the label on your prescription medication bottle to determine if it is safe to use prior to driving. Fail to read this label and act accordingly and it is only a matter of time until Tempe police pull you over and charge you with driving under the influence of drugs. In fact, the nuances of the statute pertaining to this DUI state it is irrelevant if the driver is impaired when driving. Rather, as long as the prescription drug’s metabolites are within the driver’s system, it is sufficient for a conviction.

Sadly, drugged driving in Tempe has the potential to penalize individuals who were simply following their doctor’s orders pertaining to using prescription medication. A first offense is a misdemeanor that can lead to half a year in jail, hours of drug and alcohol screening/treatment, a fine upwards of $2,500 and even probation for half a decade. At a bare minimum, a guilty verdict means you will spend 10 days in jail. Those with a pervious DUI conviction that occurred within seven years of the subsequent conviction will face a minimum of 30 days in jail, ongoing drug/alcohol screening/treatment and five years of probation. Add in the fact that there is a driver’s license suspension for a full year without any potential to get a restricted license in that time frame and there is even more reason to fight the charge.

Potential Defenses to a Drug DUI Charge in Arizona

Whether or not this is your first-offense drug DUI, you could be facing life-changing penalties and criminal consequences if you’ve been arrested for this crime. It is critical to hire a Tempe criminal defense attorney with experience handling this type of case to protect your rights. Our lawyers at Rosenstein Law Group will explore every potential defense strategy that could be used to protect you and achieve a positive case outcome. Possible defenses include:

To discuss the potential defenses available in your drug DUI case in Tempe, contact our attorneys for a free initial case evaluation. Every case is unique. We will tailor your defense according to your specific circumstances, including the evidence that the prosecution has against you and your prior criminal history. Our lawyers have connections to judges and law enforcement in Tempe. We are in a position to minimize the consequences that you face for a drug DUI charge as much as possible.

How Can a Tempe Drug DUI Lawyer Help?

Were you charged with driving while impaired (DUI/DWI) because of alleged use of marijuana, controlled substances such cocaine or Ecstasy, or prescription narcotics (illegally or legally obtained)? According to Arizona DUI laws, any amount of drugs in your bloodstream may serve as grounds for conviction even if your consumption of them was long in the past.

Tempe DUI lawyer Craig Rosenstein applies aggressive defense strategies in drug DUI defense. Rely on our team to formulate the right legal defense and you won’t lose a wink of sleep after this unfortunate event. We will determine if the police officer had probable cause to pull you over. If we take your case to trial, our lawyers may challenge the evidence used by the prosecutor, or evaluate whether your legal rights were violated in the process of the arrest.

Were the field sobriety tests or chemical tests administered according to law? Are there pertinent facts such as aspects of your physical condition or limitations that should be taken into account? Perhaps you had a valid prescription for the drug and waited long enough to drive so the impairing properties could wear off. Our Tempe drug DUI lawyers may bring in expert witnesses such as private criminologists to challenge the validity of evidence gathered unreliably.

Schedule a Free Consultation With a Drug DUI Attorney in Tempe, AZ

When alleged drug consumption is part of your DUI charges, contact Rosenstein Law Group. Our clients’ cases all begin with a free case evaluation by calling (480) 248-7666 or emailing us. Talk over the facts of your DUI case with a skilled Tempe drug DUI lawyer and explore aggressive defense strategies likely to bring about the best results.