Boating DUI In Tempe? Learn More How We Can Help

In the state of Arizona, it’s illegal to operate a boat under the influence, even if the boat is powered by sails. There are many laws and local ordinances that could come into play to protect against this behavior in Tempe. Numerous statistics say that if your BAC is .10 or higher, you are ten times more likely to die in a boating accident. Knowing this, the consequences of an OUI can be extremely severe, which is why you should contact a DUI lawyer from our office as soon as possible if you wish to challenge the allegations that have been made against you.

The US Coast Guard maintains that drinking while boating is inherently more dangerous than drinking and driving. It’s not that alcohol magically becomes a higher proof while on a boat, but the circumstances are entirely different from drinking at the bar. You’re exposed to the elements while on a boat, including the infamous Arizona sun. Environmental factors can exasperate the effects of alcohol, and lead to what is known as “Boater Fatigue”.

The Boating Safety Resource Center has stated that it’s more dangerous to drink while on the water. Few things sound better than a cold beer on a warm day while enjoying Arizona’s lakes and rivers, but being on a boat doesn’t make it safer. In fact, it’s quite the opposite. That being said, it is not illegal to drink while boating. It is only illegal to be drunk or under the influence of an impairing substance while operating the watercraft. Contact an OUI or DUI defense attorney in Tempe if you are accused of this crime. 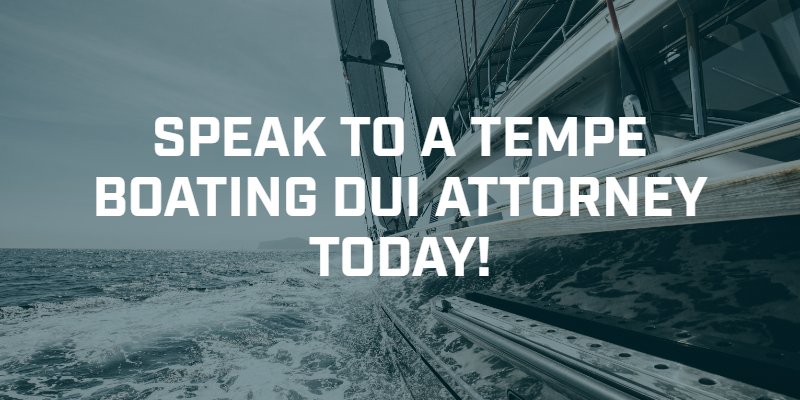 Operating Under the Influence in Tempe

In June 2008, a law was passed which would mirror the penalties for operating a boat under the influence to be the same as driving a motor vehicle while intoxicated. These were made effective in January 2009. To catch boaters who are operating under the influence, the Arizona Game and Fish Department, along with other agencies like the Maricopa County Sheriff’s Office, will often work together to conduct “saturation patrols”. If you’ve ever seen the MCSO on the water, odds are they were looking for drunk boaters. Arizona Revised Statutes (ARS) §5-395.01 states that it is considered illegal to be operating, or in actual physical control of a motorized watercraft, while under the influence – this is known as operating under the influence (OUI).

If someone is found guilty of an OUI in Arizona, they will be facing a class 1 misdemeanor and will be punishable by jail time, a fine of no less than $250, potential community restitution, and additional assessments including a $500 assessment for the prison construction & operations fund, as well as a $500 assessment for the public safety equipment fund. Beyond all of the other penalties, which are explained above, the convicted may also be required to complete alcohol & drug screening, as well as an education or treatment program.

Charged with OUI in Tempe?

If you are suspected to be boating under the influence due to erratic driving or another reason then you may be asked to perform some field sobriety tests as well as various chemical tests. These tests will be used to build a case against you, but there is no piece of evidence that can’t be fought with the experienced counsel from Rosenstein Law Group. Our firm has the experience that you need on your side if you have been charged with OUI.

Penalties for an OUI could be the same as penalties from a DUI conviction. You could face a jail sentence of up to six months, fines, in addition to screening and class costs and many other penalties. If you have been charged with OUI then do not hesitate to speak with a DUI attorney from our firm today. We will be able to provide you with the skillful and aggressive representation that you will need on your side in order to maximize your chances of a favorable outcome of your case in court. Contact us today to discuss your case and how our firm will be able to help you.