Alcohol-related accidents are a huge concern in El Mirage and are prosecuted accordingly. If you are involved in an accident and are impaired by drugs or alcohol, the consequences can be extremely severe. While most DUI offenses are considered misdemeanors, if someone is injured or killed in a DUI-related accident, felony charges will most likely be filed. Depending on the circumstances, felony Endangerment, Aggravated Assault, Manslaughter or Second-Degree Murder may be charged in DUI cases involving a collision.

The potential penalties for felony offenses differ greatly based on the facts of each specific case. Some offenses may be probation eligible, while others mandate a term of prison. 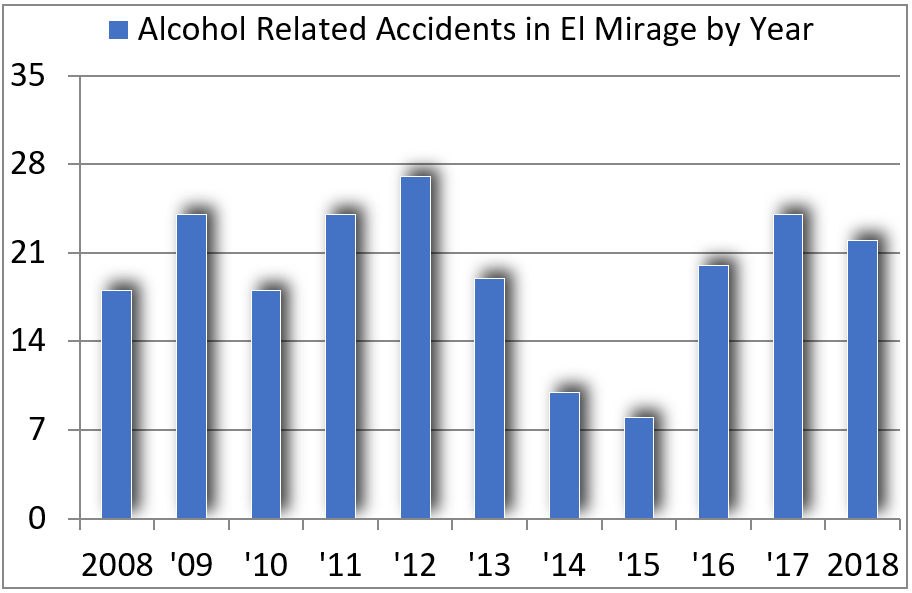 Can I Be Charged With a Felony Even if No One Was Injured?

DUI-related car accidents are traumatic for everyone involved. Given the unfortunate circumstances of a car accident, the best-case scenario is that no one was injured. However, even if there were no injuries, you could still face felony Endangerment charges. Many people who are arrested for DUI are shocked when they look at their paperwork and realize that they were charged with Endangerment in addition to the DUI charges, especially when no injuries were involved.

What Are The Penalties For Endangerment  in Arizona?

The penalties for Endangerment vary based on how it is charged.

Note: This range of potential penalties is for first time offenders; the range of penalties increases substantially for people that have prior felony convictions. Additionally, if a person is convicted of Endangerment as a class 6 felony and it is classified as a “Dangerous” offense, a judge must sentence them to prison for a range of 1.5 to 3 years; probation is not available as a punishment for dangerous offenses.

What if Someone Was Injured In A DUI-Related Car Accident?

It is very common for a person to be charged with Aggravated Assault if they cause a serious physical injury to someone because of a DUI-related car accident. Serious physical injury includes injuries like broken bones or damage to internal organs. This is typically charged as a class 3 dangerous felony. That means that if you are convicted as charged, you face a mandatory prison sentence ranging from 5 to 15 years—even if you are a first-time offender with no prior criminal history or traffic violations. Probation is not available as an alternative to prison if you are convicted of a dangerous felony. Additionally, you will face a 3-year driver’s license revocation.

If you are involved in a car accident and the police took a blood sample or you completed a breath test, you should contact a lawyer immediately. Due to the chaos involved in a car accident, DUI investigation and subsequent arrest, many people are unaware if anyone was injured in the accident. Further, you may have been taken to the hospital for injuries that you sustained, with a nurse taking your blood and providing a sample to law enforcement. It may take time for the police to contact the other parties involved in the accident to determine whether they have any serious injuries as a result of the collision. Some internal injuries may not be immediately apparent, which could delay their reporting to law enforcement. Moreover, testing your blood for alcohol or drugs can take months. These factors make it common for Aggravated Assault charges to be filed months after the date of a collision.

It is important to know that there could be a delay between the accident and charges being formally submitted. Knowing this will allow you to act immediately, even before charges are filed. Contacting a lawyer right away is the best way to ensure that your rights are protected. It may be necessary to document the scene of the accident and the condition of the vehicles before key evidence is destroyed. This crucial information could be invaluable if an accident reconstruction expert is needed. When you are facing penalties that involve mandatory prison time, you need an experienced criminal defense attorney that can conduct an independent investigation. Having an attorney early on, even before charges are filed, is often the best course of action.

The Rosenstein Law Group has years of experience in handling DUI and Aggravated Assault cases. We work with expert witnesses in the fields of forensic toxicology, accident reconstruction, and medical care. Contact us any time at 480-248-7666 or online for a free consultation and case evaluation.

Arizona is tough on DUIs because of the inherent danger of driving while impaired. The worst-case scenario is a DUI accident that turns lethal. These cases are typically charged as Manslaughter in Arizona. However, in certain circumstances they may be charged as Second-Degree Murder if a person manifesting extreme indifference to human life recklessly engages in conduct which creates a grave risk of death and in fact causes the death of another person. This is a class 2 felony punishable by a range of prison from 10 to 25 years.

The more commonly charged crime of vehicular Manslaughter does not require an “extreme indifference to human life.” Rather, it only requires a showing that a person recklessly caused the death of another person. In the context of vehicular Manslaughter, “recklessly” means that a person is aware of and consciously disregards a substantial and unjustifiable risk that a death may occur. Unawareness of the risk of death because one has voluntary intoxication is not a defense.

Vehicular Manslaughter is a class 2 dangerous felony punishable by a range of prison from 7 to 21 years for a first-time offender.

If you find yourself in the worst-case scenario of a fatal DUI accident, you should contact an attorney immediately. In the days, weeks and months after the accident it is important to make sure that any possible exculpatory evidence is documented and preserved. Exculpatory evidence is evidence that may point to your innocence. Unfortunately, in most cases you cannot rely on the police investigation alone to find exculpatory evidence. It is often necessary to work with experts in forensic toxicology, accident reconstruction, and medicine.

An aggressive, yet methodical approach to building your case may lead to defenses based on a lack of impairment, a supervening cause of death or a violation of your constitutional rights. In some cases, early intervention from a criminal defense attorney before you are charged may help reduce or eliminate the potential consequences of your arrest. Vehicular Manslaughter cases are very complex, so there are countless seemingly small errors that may be made during an investigation that can lead to serious problems with the state’s evidence. That is why it is in your best interest to have an experienced attorney representing you throughout the process.

What Does it Mean To Be Charged With a “Dangerous” Felony?

Not only could you face a felony charge as a result of a DUI accident, but that felony could also be charged as a “Dangerous” offense. A dangerous offense is an offense involving the discharge, use or threatening exhibition of a deadly weapon or dangerous instrument or the intentional or knowing infliction of serious physical injury on another person. In the case of DUI-related accidents, the prosecution often submits a dangerous allegation because a car is considered a dangerous instrument. An object, such as a car, may be deemed a “dangerous instrument” if under the circumstances that it is used, attempted to be used or threatened to be used, it is readily capable of causing death or serious physical injury.

Get Help With Your El Mirage DUI with Accident Case Today

If you were involved in an accident involving a DUI, you should immediately reach out to an attorney to seek legal advice. Even if you are unsure if there were any injuries or if you were only cited for the DUI on the date of the incident, you may still be subsequently charged with a felony. Having a criminal defense attorney early on in your case will help protect your rights and ensure that your case is being handled properly. Contact the Rosenstein Law Group at 480-248-7666 or online to schedule a free consultation and preliminary case evaluation.

COVID-19 ALERT: We are open & can be reached 24/7 to discuss your case with you. A quick & easy remote intake process with consults via phone or video now available. Call now or contact us online.