If you have been arrested or charged with a DUI in Bisbee, Arizona you need to contact Rosenstein Law Group at (480) 248-7666. Get the representation of DUI Law Specialists who will aggressively handle your case.

You will be charged with a regular DUI in Bisbee, Arizona if you are found to be driving while impaired to the slightest degree or driving with a blood alcohol concentration of .08% within 2 hours of driving

You will be charged with an extreme DUI in Bisbee, Arizona if you are found to be driving with an blood alcohol concentration between .15% and 0.20% within 2 hours of driving.

You will be charged with an aggravated DUI in Bisbee, Arizona if you are found to be driving under the influence while your license is suspended, revoked, or canceled; driving the wrong way on a highway; while a person under the age of 15 is in the vehicle; you refuse to submit to a blood alcohol concentration test while under an ignition interlock requirement; or it is your third DUI in 84 months.

You will be charged with a super extreme DUI in Bisbee, Arizona if you are found to bedriving under the influence with a blood alcohol concentration of .20% or more within 2 hours of driving.

You will be charged with drugged DUI in Bisbee, Arizona, if you are found to be driving or is in actual or physical control of a vehicle while under the influence of a legal or illegal substance that resulted in impairment at the time of driving. 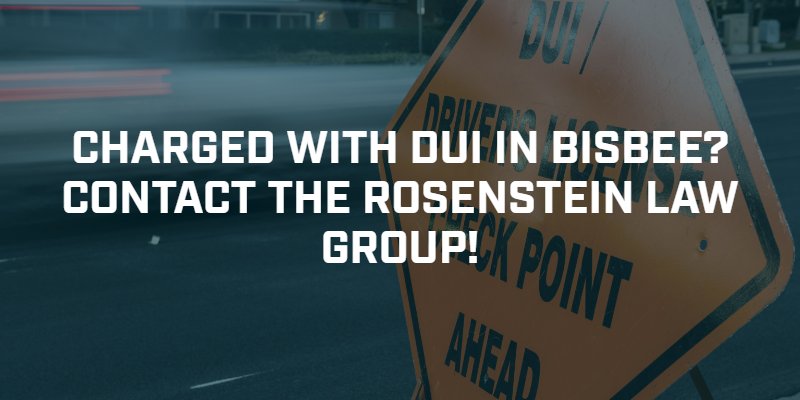 Before an officer makes an arrest for a suspected DUI, they must offer the driver the chance to perform the Standardized Field Sobriety Tests. First, the officer must ask the driver if they are injured, sic, have any physical disabilities, and if their shoes are comfortable. Generally, a Bisbee Police Officer will administer 3 different test under the umbrella of the Standardized Field Sobriety Test: The Horizontal Gaze Nystagmus; The Walk and Turn Test; and The One Leg Stand Test.

Officers may consider using alternative, optional tests in situations if the aforementioned test cannot be completed. These tests include the Alphabet/Number Test, the Balance Test. and the Finger to Nose Test.

When a DUI suspect is arrested by a Bisbee police officer, to make the DUI arrest the officer must:

A records check will be conducted on all persons arrested for DUI including driver’s license status and prior DUI history.

The Southeastern Arizona DUI Task Force and the Bisbee Police Department are the agencies that set up checkpoints and roadblocks in Bisbee, Arizona.

The DUI laws in Bisbee, Arizona are strict. A first time DUI offender can expect a minimum sentence of 10 days in prison, a fine of $1,250 plus surcharges, and a 90-day license suspension. The penalties increase steeply if you are a repeat offender. For example, a second time DUI offender in Bisbee can expect a longer jail sentence and more expensive fees, as well as a 1-year license suspension. Other penalties include, mandatory counseling, having ignition interlock device installed on your vehicle, probation, and increased car insurance costs.

Experienced Bisbee DUI defense attorneys know the law and court processes that can be long and challenging to navigate.

You would want an experienced Bisbee DUI defense attorney to represent you in court.

If you are charged with DUI, let us help fight for your rights. Call the DUI Law Specialists at Rosenstein Law Group today at (480) 248-7666 for your free consultation.