If you have had the unfortunate experience of being arrested for driving under the influence in Phoenix, Arizona, it is important you understand two (2) things: 1) your case will be handled by one of the many Justice Courts that have been assigned your case and 2) each justice court has its own rules and procedures. If you have found yourself in this situation and need more information on what to do next, contact our office at 480-248-7666 and an experienced DUI attorney will be able to answer all of your questions. Rosenstein Law Group is equipped with DUI attorneys that have handled successful DUI defense cases all across the State of Arizona. Cities such as Gilbert, Scottsdale, Mesa, Queen Creek, Glendale, Surprise, Tucson, Flagstaff, Tempe, Chandler, Peoria, and many more. In addition, if you are worried about the costs associated with defending your case, do not worry, we will provide you with a free consultation to help advise you on your situation.

The Moon Valley Justice Court is one of the many Justice Courts that handle a mixture of misdemeanors and civil offenses. There are four (4) important areas to address in order to understand how a Justice Court will process your case and they are as follows: 1) what a DUI is, 2) the court overview, 3) the types of cases seen here, and 4) the various stages of a DUI/criminal case. 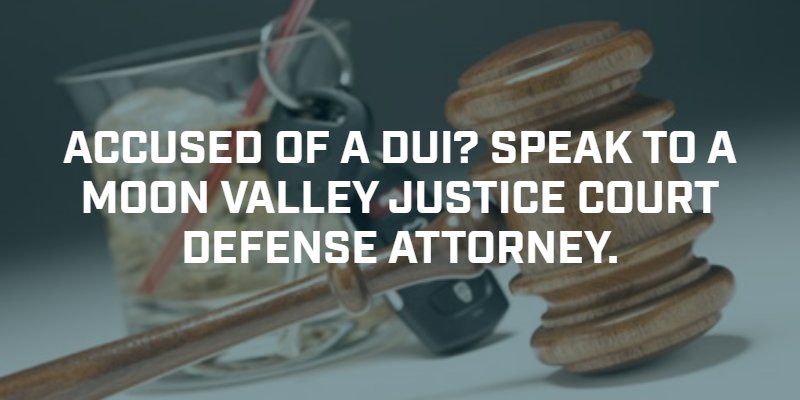 I Was Arrested For a DUI in Phoenix, is it Serious?

If you have ever heard that the Blood Alcohol Content (BAC) of .08 is the level of intoxication that is prohibited to drive a motor vehicle, you are right. The punishments, however, vary widely depending on the state you live in. Many people think they have to be drunk on alcohol to receive a DUI, however, an individual could just as easily receive a DUI for driving while under the influence of a medication that is legally prescribed to them.  In Arizona, A.R.S. § 28-1381 describes a DUI as operating a motor vehicle while impaired by not only alcohol, but controlled substances, drugs, or with a BAC of .08 percent or higher. While there are different varieties of DUIs depending on your BAC level, it is easiest to talk about the range of penalties that can be imposed for your first offense, second offense, and third offense.

The first offense of DUI can result in jail time, fines and penalties, license suspension, and an interlock ignition device requirement. The penalties are as follows:

The penalties for a second offense of DUI are as follows:

The penalties for a third offense of DUI are as follows:

Will My Case Go To The Moon Valley Justice Court?

What Can I Expect When Going Through the Moon Valley Justice Court Process?

Sometimes legal proceedings can be very difficult to understand, and it is important that you find an experienced DUI attorney who can walk you through the stages of the criminal process. The Moon Valley Justice Court has ten (10) key stages that are common to all criminal cases, including DUI. These stages are as follows:

An initial investigation typically starts the process that leads to an arrest.

After being taken into custody, you must be brought before a judge within twenty-four (24) hours to be given formal notice of the charges against you.

A prosecutor can file a criminal complaint or an indictment from a grand jury if probable cause is found after reviewing police reports and evidence.

After the prosecutor files the criminal complaint, the judge in The Moon Valley Justice Court will hold a preliminary hearing to determine whether probable cause exists.

Arraignment is where the defendant pleads guilty, not guilty, or no contest is entered.

After the case is set for trial, the defense and prosecution have the opportunity to examine evidence and interview witnesses.

Plea negotiations operate like a regular negotiation would. Your defense attorney will negotiate the best possible plea agreement for you with the prosecutor.

If your case ever goes to trial, which Defendants have the right to a jury trial, the prosecution must prove beyond a reasonable doubt that all of the elements of the crime have been met.

After the verdict of guilt or acquittal has been rendered, the defendant moves into the sentencing phase. If the defendant is convicted, the judge will be provided with a range within which to sentence.

The defendant has the right to appeal the verdict if he or she is unsatisfied with the results. An appeal is brought to a higher court to either overturn or affirm the decision of the lower court.

Remember, it is always important to have a criminal defense attorney to help guide you through this process. Here at Rosenstein Law Group, our DUI defense attorneys serving Tempe and The Moon Valley Justice Court provide our clients with the legal assistance they need through years of experience and a successful track record. Contact us at our office at 480-248-7666.