In Marana, Arizona, the consequences of driving under the influence (DUI) offense may vary depending on the type of DUI you are charged with, based on your case’s particular circumstances. In fact, there are several different types of DUI’s under Arizona law that you should be aware of if you are planning on driving in the state. It is important to understand the differences between the various types of violations in order to understand what consequences you may face, such as the revocation of your driving privileges. The Marana DUI defense attorneys at the Rosenstein Law Group are ready to take on your case and assist you throughout the legal process.

For help with your DUI defense, call the DUI lawyers at Rosenstein Law Group for the best possible outcome in your Marana, AZ case. Our law office has both certified DUI and Criminal Law Specialists. Our experienced DUI lawyers have a long history of defending clients’ in Pima County and the city of Marana. A DUI lawyer is available 24/7 and ready to help you with your DUI defense by calling 480-248-7666.

In Marana, the Metro DUI Enforcement Unit of the Arizona Department of Public Safety, the Pima County Sheriff’s Department, and the Marana Police Department are responsible for conducting DUI stops and DUI checkpoints. Officers are instructed to stop any driver suspected of driving under the influence as soon as it can be done lawfully and safely, whether on private or public property. Officers are permitted to make this stop based on reasonable suspicion of impairment. In making this assessment, officers may consider many factors, including a driver’s vehicle movements.

Before an officer arrests someone for a suspected DUI, they must offer the driver the chance to perform a “Standardized Sobriety Performance Test.” First, the officer must ask the driver if they are “injured, sick, ha[ve] any physical disabilities, and if the[ir] shoes are comfortable.” Marana offers three Sobriety Field Tests, which include:

If, for some reason, none of the above tests may be administered. Then an officer may use optional additional tests such as an Alphabet/Number test, a Balance test, and/or a Finger-to-nose test to test the driver’s impairment.

When making an arrest for a DUI, Marana officers must keep a record of details such as evidence that the driver was in control of the vehicle (Eg., vehicle key in the ignition, placement of the driver, the location of the vehicle, etc.) and any other relevant details. Further, for an officer to place a suspected impaired driver under arrest, they must have probable cause that the suspect:

If the officer has sufficient probable cause and places the suspect in custody, they must read the driver their Miranda rights if they intend on questioning them while in custody. Only if the driver confirms they understand their rights and do not request an attorney may the officer begin questioning the driver. Further, the driver’s driving record and driver’s license status shall be checked and suspended.

Prior to any breath, blood, or urine test being administered, the suspect must be allowed access to an attorney ONLY if requested. Arresting officers must also read aloud and complete an Admin Per Se/Implied Consent Affidavit documenting the facts constituting probable cause for the arrest. This Affidavit will eventually be submitted to the executive hearing office at the MVD.

If the suspect fails or refuses to take a breath, blood or urine test to assess Blood Alcohol Concentration. Then the officer must then serve the driver with a 12-month Order of Suspension and seize their license/permit (so long as it is an Arizona one). If the suspect completes a BAC test and the results are not available or indicate a BAC of 0.08 or more (or 0.04 or more for commercial vehicle operators). Then the officer must complete the DUI Affidavit, serve the driver with a 90-day Order of Suspension, and seize their Arizona license/permit. Should a driver’s license/permit be seized, they will be issued a valid temporary driving permit for 15 days.

Court Process for DUI in Marana 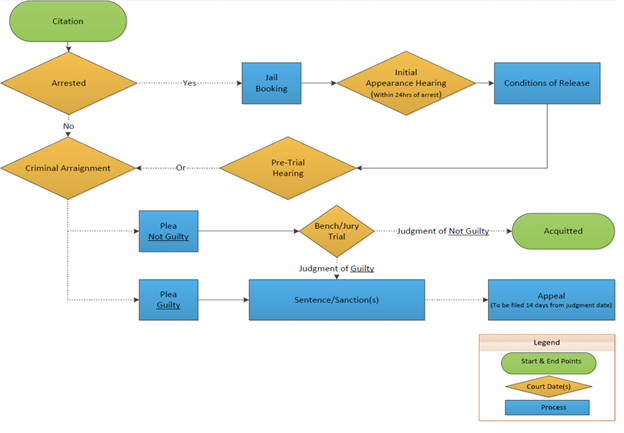 If you are stopped for driving under the influence, and a test confirms your BAC to be .08 or above, you will immediately lose your ability to drive. Per state law, if this is your first offense, you will be sentenced to a minimum of 10 days in prison and fined a minimum of $1,250 (with surcharges and added fines, it ends up being closer to $2,500).

The Court may, at its discretion, suspend up to nine of those days. You will also be required to undergo treatment and screening for substance use and perform community service and install a “certified ignition interlock device” on your vehicle(s). If this is a subsequent offense, the jail time is increased to a minimum of 90 days, the fine increased to no less than $3,000, and your license will be revoked for an entire year.

If you are stopped, and your BAC is found to be .015 or above, the punishments for a DUI are different. On your first offense, you will be jailed for a minimum of 30 days without the option of probation and ordered to pay a minimum fine of $2,500. Additionally, you will be required to undergo treatment and screening for substance use and perform community service and install a “certified ignition interlock device” on your vehicle(s).

As with a standard DUI, the consequences are more severe if this is not your first offense. In subsequent offenses, you will be fined a minimum of $3,250 and jailed for a minimum of 120 days. In addition to required treatment and screening for substance use, mandatory community service, and installing a “certified ignition interlock device” on your vehicle(s), you will also lose your license for an entire year.

A person will be charged with an aggravated DUI where the person commits a DUI while their license is suspended, revoked, or canceled; commits a third DUI in 84 months; commits a DUI while a person under 15 is in the vehicle; drives the wrong way on a highway, or commits a DUI or refuses to submit a blood alcohol content test while under an ignition interlock device requirement.

In addition to the applicable consequences depending on the type of the underlying DUI offense, you can be imprisoned for a maximum of two years and lose your license for an entire year. It depends on whether the state charges a class 4 or class 6 felony and on a myriad of other variables as to your actual prison term. As with the other DUI offenses, you will also be required to undergo treatment and screening for substance use and perform community service and install a “certified ignition interlock device” on your vehicle(s).

A first-time Super Extreme charge carries a minimum jail sentence of 45 days, a minimum fine of $2,750, a 90-day license suspension, as well as treatment and screening for substance use, the possible required performance of community service, and the installation of a “certified ignition interlock device” on your vehicle(s).

A subsequent Super Extreme charge will carry even more serious consequences. The jail time is increased to a minimum of 180 days, the minimum fine is increased to $3,750, and significant jail fees. Additionally, you will need to install the certified ignition interlock device for two years and complete community service and treatment and screening for substance use.

Similar to other DUI offenses, operating a vehicle under the influence of drugs can lead to severe punishments. Unlike other DUI charges, you may be found guilty of a drugged DUI if an officer believes you are impaired even to the “slightest degree” due to the influence of drugs — whether prescribed or not — and even if they were not taken on that day. This charge may carry up to 6 months in jail, $2,500 in fines, a 90-day suspension of your license, mandatory substance use classes, and possibly more.

Given the seriousness of any DUI charge in the State of Arizona and the wide range of consequences, it is imperative that anyone being charged with a DUI contact and retain a DUI defense attorney. With the assistance of experienced DUI lawyers, mandatory minimum penalties can be reduced through negotiation strategies. Due to the specialized nature of this law, it is highly recommended that you seek competently and experienced DUI lawyers.

If you were arrested and charged with a DUI in Marana, contact a Marana DUI attorney at Rosenstein Law Group for the best possible outcome. Our DUI Law Specialists are strategic and very aggressive in attacking breathalyzer tests, blood tests, and the handling of blood samples to defend you in Marana DUI criminal defense cases. We offer a free consultation and will give you an honest assessment of potentially available on your DUI defense for your case. Speak with a DUI defense attorney by calling our law office today at 480-248-7666 or use our online contact form.